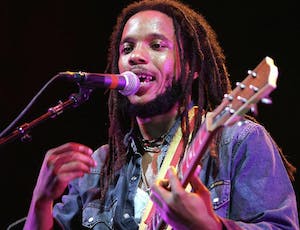 Few people were surprised when Stephen Marley’s long awaited debut solo album “Mind Control” (Tuff Gong/Ghetto Youths/Universal Republic) premiered at No. 1 on the Billboard Reggae Album chart in March 2007; after all, the singing, songwriting and production excellence Stephen had brought to other Marley family projects over the years, including younger brother Damian’s two Grammy Award winning albums, practically guaranteed “Mind Control” would be a remarkable effort. And indeed it is: “Mind Control” is that rare self-produced set featuring a cohesive range of diversified styles, each delivered with equal proficiency. Whether Stephen is the revolutionary roots rocker decrying mental slavery on the album’s title cut, an outraged prisoner protesting his jail term for marijuana possession on the bluesy “Iron Bars”, a forlorn romantic mourning a break-up on “You’re Gonna Leave” or an irresistible retro-dancehall toaster flaunting his mic skills on “The Traffic Jam”, each track on “Mind Control” reconfirms Stephen’s expansive capabilities as an affecting vocalist, a versatile lyricist and an accomplished instrumentalist while furthering his renown as an ingenious producer.

Also unsurprising was the widespread critical acclaim that accompanied “Mind Control’s” release: Interview Magazine called it “a quiet masterpiece, easily the best effort from a Marley progeny” while Entertainment Weekly hailed it as “the best Marley album in a generation.” “Mind Control” was bestowed with the Best Reggae Album Grammy in 2008 while its unplugged version “Mind Control-Acoustic” was similarly honored in 2010, increasing Stephen’s Grammy Award total, earned from his various roles on assorted Marley family projects, to seven, a record-setting number for a Jamaican artist.

Attaining such mastery didn’t happen overnight and Stephen is gratified by the time it has taken. “I believe in struggling to attain greatness and it has taken a lot of sacrifice to get these things,” he explains. “Its like exercise, you can’t just get fit you really have to work at it. It is the same thing with music, if it come easy, it is going to go easy so we really appreciate the years, the time that it takes, the time that we put into it; what comes out of it, I don’t take that for granted either.”

The second son of Bob and Rita Marley, Stephen was born on April 20, 1972; he began his career as a precocious six-year old singing, dancing and playing percussion with his siblings in the group The Melody Makers whose first single “Children Playing In The Streets” was produced by their father in 1979 and released on Tuff Gong, the label founded by Bob in the late 60s. Just like his older brother Ziggy, Stephen acquired his initial studio skills by watching his father. While still a teenager he assisted in the production of The Melody Makers’ albums including their three Best Reggae Album Grammy winners “Conscious Party” (Virgin Records, 1989) “One Bright Day” (Virgin Records, 1990) and “Fallen Is Babylon” (Elektra Entertainment, 1998). In 1993 Ziggy and Stephen founded Ghetto Youths International as a means of controlling their own music and helping upcoming artists. Stephen’s earliest solo production efforts for Ghetto Youths International includes his late grandmother’s (Cedella Booker) album “My Altar”, followed in 1995 by the Ziggy Marley and The Melody Makers single “Works To Do” and younger brother Damian’s “10,000 Chariots”. Both singles hit the Jamaican charts and generated much excitement surrounding Stephen’s burgeoning production expertise.

In 1996 Damian released his debut album “Mr. Marley”, on the Ghetto Youths imprint, with distribution in the U.S. by Tuff Gong/Lightyear. Stephen played several instruments and wrote most of the songs in addition to producing “Mr. Marley”. He also taught his younger brother how to ride a “riddim” and has been an invaluable mentor in Damian’s dramatic transformation from an inexperienced teenaged hopeful into a confident global adult hit-making artist.

The first project that brought Stephen’s production capabilities widespread attention was “Chant Down Babylon”, where he audaciously manipulated his father’s original vocal outtakes from the 1970s Island Records’ sessions, splicing them into duets with hip-hop and R&B artists, while updating the Wailers’ richly textured one-drop rhythms with an assortment of samples, loops and overdubs. The results ranged from the late Guru’s heartfelt take on “Johnny Was” to Busta Rhymes’ street version of the reverential “Rasta Man Chant” to Aerosmith’s Steven Tyler and Joe Perry’s hard rocking raucousness on “Roots Rock Reggae”. “Chant Down Babylon” achieved its objective of bringing Bob’s music to a new generation of fans, earned a Grammy nomination, was certified Gold by the Recording Industry Association of America and has sold more than one million copies worldwide.

Stephen’s hip-hop infused dancehall beats were far more fluid and complex on Damian’s 2001 album “Half Way Tree” (Ghetto Youths/Motown) with spectacular growth displayed by both the producer and the artist. Stephen demonstrated equal dexterity in creating rugged roots reggae rhythms, which supported the well-crafted, substantial lyrics and the seamlessness of Damian’s vocal flow. “Half Way Tree” yielded several hits in Jamaica, and internationally, including “More Justice” and “It Was Written” (featuring Capleton) and won the 2002 Grammy for Best Reggae album.

Stephen produced and contributed vocals to Damian’s single “Welcome To Jamrock”, the biggest reggae song of 2005. Anchored in a blistering bassline courtesy of Robbie Shakespeare, sampled from a 1985 hit by Ini Kamoze, “World A Reggae Music”, “Welcome To Jamrock’s” haunting, gritty portrayal of Jamaica became an anthem throughout the island and on urban radio all over America. Stephen was nearly finished with “Mind Control” at the time of “Jamrock’s” release but to maximize the momentum of the hit single within the international marketplace, the completion of Damian’s third album now took precedence on his production schedule. Released in September 2005, “Welcome To Jamrock” (Tuff Gong/Ghetto Youths/Universal Republic) entered the Billboard Top 200 Albums Chart at No. 7, a record setting opening week for a reggae artist; it was certified Gold and won the 2006 Reggae Album Grammy while the single was honored for the Best Alternative Hip Hop performance, another first for a Jamaican artist.

Meanwhile, the success of “Welcome To Jamrock” increased the anticipation surrounding the release of Stephen’s solo effort and when “Mind Control” finally arrived, it merited more attention than any Marley family member’s album in recent memory. Recorded at the Marley Music studio in Kingston and the Marley’s Lions Den studio in Miami “Mind Control’s” organic blend of eclectic elements defied categorization, surprising many listeners who exclusively associate the Marley name with reggae. “Mind Control is an enlightening album, it is an uplifting album for your thought and for your spirit,” said Stephen, reflecting on his debut. “To me it is a balanced record because you have some social messages in there, some spiritual messages and some personal messages so there is something there for everyone.”

In early 2010 Stephen contributed vocals to two tracks on Damian Marley and Nas’s lauded album “Distant Relatives” (Ghetto Youths/Universal Republic/Island Def Jam), the hard hitting “Leaders” and the devotional “In His Own Words” and produced a third track, “Patience”. Damian primarily steered the album’s production but Stephen played what both Marleys describe as a “big brother role”. “Well, that means I am the teacher but Damian is his own man, so basically if I hear something, that don’t sound too right, I would say that have to change,” Stephen offered regarding his involvement with “Relatives”. “It was just being his bigger brother and guiding him same way.”

While Stephen has built a formidable reputation handily navigating between genres, his second (as of yet untitled) album, due for release in 2011, marks a return to roots reggae, because “that is just the way the songs came out of me,” he explained. “Having to tour and having been out there for the past three years, I have been writing a lot of new material and to me and to the people around me, this album is very strong, with some very strong political songs. I wasn’t as excited about “Mind Control” as I am about this album,” Stephen enthused. “We didn’t plan it, it just came together naturally and sometimes things just work out better that way.”