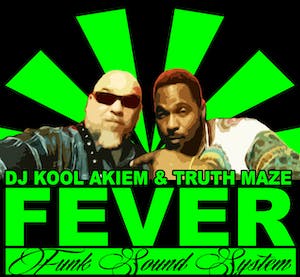 DJ Kool Akiem is an educator, teaching artist, renowned DJ, composer, sound designer, and producer. Widely recognized as a pioneer of the Twin Cities Hip-Hop community, he’s produced for the legendary Micranots, was DJ for MF Doom's domestic and European tours, and has performed with artists such as Public Enemy, De La Soul, The Roots, Grandmaster Flash, and Jazzy Jeff. Kool Akiem has produced seven albums, many of which are critically acclaimed that released on Rhymesayers Entertainment, Subverse Records, and Mental Madness Wreckords. He has held DJ residencies in New York and Atlanta, and hosted radio shows including The Panther Power Hour on WRFG (Atlanta) and WEQY (St. Paul).

His expertise and philosophies on Sampling and Hip Hop pedagogy have been featured in several books including Five Percenter Rap by Felicia Miyakawa and Making Beats by Joseph Schlosh. He composed original scores for the award-winning stage play Kung Fu Zombies vs Cannibals (Theater Mu), was DJ for Illyria (Theater Latte Da), a sound designer for The Two Kids That Blow Shit Up (Theater Mu) and was recently commissioned to compose the theme song for Kung Fu Zombies vs Shaman Warrior (Smithsonian). He currently teaches Hip Hop Music History at McNally Smith College of Music and conducts DJ and recording residencies and workshops for all ages as a teaching artist through COMPAS, East Metro Integration District, and Intermedia Arts.

Truthmaze is one of the originators and premier hip hop artists in Minnesota, beginning in 1983, as a vocal percussionist (beatboxer) known as B-Fresh. He was part of one of the first hip hop recordings from Minnesota to reach national presence as part of the I.R.M. Crew, and has been recording since 1986 with such groups as I.R.O.C., Brown Mark (of Prince and the Revolution), Mixed Breed and The Mighty Micronauts, whose infamous debut album was recently re-released on Rhymesayers Entertainment.

Truth Maze is a cornerstone of the Twin Cities music scene, one of the originators and premier hip hop artists in Minnesota, and a major contributor and pioneer of Minneapolis hip hop culture. Born William Harris, a native of Minneapolis, MN, his career started with having a strong rhythmic sense making him a natural drummer from birth. This natural ability would later connect to his uncanny skills as a verbal percussionist known as ‘The Unstoppable B-Fresh’ who started performing in 1983. He was part of one of the first hip hop recordings from Minnesota to reach national presence as part of the I.R.M. Crew, and has been recording since 1986 with such groups as I.R.O.C., Brown Mark (of Prince and the Revolution), Mixed Breed, The Mighty Micronauts, whose infamous debut album was re-released on Rhymesayers Entertainment, as well as a host of other guest appearances and compilation projects.

In 1989, he embarked into the genre of spoken word and has excelled there as well. He is one of the most dynamic spoken word artists on the scene, with his performance infusing everything from African drumming, jazz, hip hop, to neosoul. He has been a member of a number of bands and collectives, in addition to the ones mentioned above, including Trektah Beam Express, Blak Pham, Moveable Feast and the Dijonettes. He sings, plays percussions, rhymes, beatboxes, and has been compared to Gil Scott Heron, Saul Williams, KRS One, the Last Poets, among others.

His ﬁrst solo project was recorded and released in 2006, on which he would display his expanding versatility. The Expansions and Contractions’ album would prove Truth Maze’s skills as a spoken word artist and musician. He traveled to England, where he debuted Expansions + Contractions (Psoems 1:1), in addition to performing at several venues, featuring on BBC radio + television, along with producing several new tracks. He was also a featured performer at the 5th Annual Twin Cities Hip Hop Festival.

A performer who comfortably expresses himself across various genres of music, eclecticism is but second nature to Truth Maze, an artist that easily accomplishes being multidisciplinary. While he is an excellent performer, he has also been praised as a percussionist and educator, who for more than a decade has taught drumming and rap to youth.

Oya’s Radio is Truth’s newest visionary musical quest, and is once again evidence of his ability to stretch further, utilizing his vocal talent as lead man of the band. Along with the aforementioned, Truth Maze is now experimenting with dance performance projects, theater, and future artistic collaborations, all while still working with various youth and community organizations. His art is his passion, activism, and spirit. Ladies and Gentlemen, introducing TruthMaze.

"As a child, I got to talk to Truth Maze maybe five or six times face up. This was way before Atmosphere, way before the Micranots. It was like being in the presence of a god. He had such an energy to him. He always smiled. Anything that he said to me, I decreed as law, and I would take back to my friends, Mark and Adam, and we would live that way." - Slug (of Atmosphere)

"He has a hip hop pedigree that goes back to his days with local pioneers the Micranots and the IRM crew. Since then, he has bounded from acid-jazz (with Moveable Feast) to Afrofunk (the Dijonettes) to his ongoing spoken-word experimentations." - Chris Riemenschneider, Star Tribune